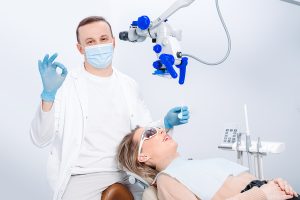 Can gum disease cause dementia?

Yes, says a new mega study published in the Journal of the American Geriatrics Society.

Fortunately, there is something that you can do to prevent (or reverse) both gum disease and dementia.

As many studies had already been done on oral health and dementia, the researchers behind this new study conducted a literature review, analyzing studies up to 2022 across five electronic journal databases.

They collected studies that tested the relationship between periodontal health and either cognitive decline or dementia. All of the reviewed studies were longitudinal, meaning that they were performed over a long period of time.

Of the 4,155 studies that they found, they selected the 47 with the highest-quality research methodologies. Of these, 24 focused on cognitive decline, and 23 focused on dementia.

1. Poor periodontal health increased the participants’ risk of cognitive decline by 23% and that of dementia by 21%.

2. Tooth loss alone increased their risk of cognitive decline by 23% and that of dementia by 13%.

3. Partial tooth loss increased their risk of cognitive decline by 50%.

4. Complete tooth loss raised their risk of dementia by 23%.

Therefore, poor periodontal health is undeniably linked to both cognitive decline and dementia.

But why is gum disease a risk factor for poor cognitive performance?

The main problem is that the gums of people with gum disease are inflamed and inflicted with tiny tears. These tears allow large amounts of oral bacteria to enter their bloodstream and travel to their brain, where they can kill neurons and promote an overabundance of potentially harmful proteins, such as beta-amyloid.

Additionally, chronic bacterial infection in your mouth produces a huge immune response that causes systemic inflammation throughout your body, including your brain.

Evidently, brushing and flossing can save far more than just our teeth—they can also save our cognitive function as we age.

Unfortunately, brushing and flossing are not enough to eliminate gum disease if you’re already suffering from it. But thousands of readers have completely cured their gum disease using these easy, natural tricks…

To prevent or even reverse Alzheimer’s disease and other types of dementia, you need to load up on this one free ingredient…