Brush This to Heal ED (not nutty) 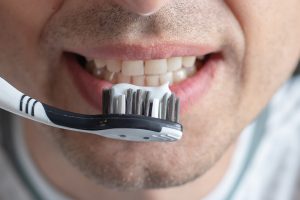 How can a simple brush found in all supermarkets fend off ED?

Easily, says a new study—because you’re brushing off something that can increase your risk of ED by up to 590%.

Periodontitis is a major bacterial infection of the gums that destroys the bone and soft tissue anchoring your teeth. A new study in the British Dental Journal shows that men with periodontitis are more likely to get ED.

The authors of this study found 13 similar studies, all of which concluded that people with periodontitis have a high risk of developing ED relative to the general population.

Some studies point to a modest but still significant 53% increase in risk, while others indicate that those with periodontitis are 5.9 times more likely to have ED.

While the degree of risk varies widely by study, all of the studies agree that there is a significant increase in ED risk among those with periodontitis.

Research shows that the periodontitis bacteria leak into the bloodstream and cause inflammation, which blocks blood flow to the genitals. This is similar to how periodontitis can contribute to cardiovascular diseases.

The simplest way to prevent this phenomenon is to use dental flush and then brush your teeth at least twice a day with a strong antibacterial toothpaste to remove the bacterial plaque. Be sure to spit out all of the debris.

But to fend off erectile dysfunction permanently, you need these easy at-home ED exercises that pump blood into the genitals and prevent leaking…