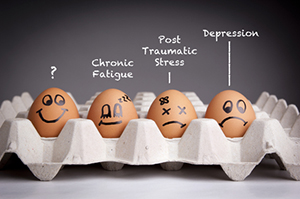 Fact #1: Everyone feels fatigued at some point. Catch a nap, take a nice long weekend, and it’s gone. No big deal.

Fact #2: Feeling tired all the time is a sign of chronic fatigue. Or it can mean you’re suffering from fibromyalgia. Either way, it’s a big deal.

For ages and ages, no one really knew what caused chronic fatigue. Was it a psychological disorder or something else? A bit of a mystery.

Chronic fatigue and fibromyalgia can be resilient and then strike all of a sudden. These problems are not understood well even though nearly 1 million people suffer from it in United States alone. But thanks to recent findings by a National Institute of Health study, the problem has been identified at the root level – that is the genes.

140 patients with chronic fatigue syndrome participated in the study and their gene expression was studied before and multiple times after moderate exercise. A new gene expression technology was used to identify differences in gene activity compared to the performance of healthy individuals.

The team has currently patented the gene expression technology so that it can be used as a convenient diagnostic tool for identifying the disease through simple blood tests.

Similarly, physicians no longer consider this problems as ‘something that’s in your head. Chronic fatigue and fibromyalgia is very much real, painful and debilitating. More and more physicians are accepting them as health disorder that requires immediate care and treatment.

Here’s to a life full of energy that comes from eliminating fibromyalgia. By natural methods. And that means no medications. Just follow this link to learn how.