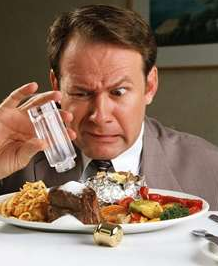 For the last 30-40 years, we’ve been hearing the same message everywhere we go:

The problem is, there is not a single, reliable scientific study to back this song up. On the contrary; there are actually quite a few studies that indicate the opposite.

Everything, however, has its time and place. Some forms of salt should be avoided at all cost. Other forms are necessary and you may not be getting enough of that type of salt.

That’s why in today’s feature article I’ll go over the issue of salt from A to Z and debunk some of the more ridiculous propaganda we’ve been bombarded with.

Lets begin our journey with a recent study from The University of Exeter in the UK. This study analyzed numbers from three studies, totaling 6,250 people who had either normal blood pressure, high blood pressure or previous heart problems.

Around 10% – 665 people – died during the study period and the connection between salt intake and those deaths was what researchers were measuring.

No surprise that blood pressure rose slightly for those who consumed more salt than those who restricted their salt intake. However, it was an impact of only 1-4 mm/Hg systolic blood pressure. This approaches being statically irrelevant.

Other than slight a reduction in blood pressure, reducing salt had absolutely no positive effects. People with both high and low blood pressure who reduced their salt intake died just as frequently from stroke and heart attack as those who didn’t restrict salt.

And this is not the only study debunking the salt myth.

A European study published in the May 4 issue of The Journal of the American Medical Association followed 3,681 middle aged individuals who did not have high blood pressure at the beginning of the study for 8 years.

How is this possible? How can it be that something that has become such common knowledge is maybe nothing but one big myth?

You see, studying salt intake on a long term basis is very difficult. Most people consume the majority of their salt from processed food and are maybe not even aware of how much salt they’re eating. So surveying people about salt consumption is almost impossible.

The only way to accurately measure salt consumption is by taking a 24-hour urine sample (asking people to put all their urine in a bottle for 24 hours). This is what they did at the end of the second study above.

Most studies in the past have, however, not used the urine method. Instead they’ve either surveyed people over many years or asked people to drastically raise or lower their salt consumption over a short period of time, which raises blood pressure a little bit and therefore the conclusion is that salt is dangerous.

The problem with this method is that salt is usually not the only thing people do to improve their health. Usually health campaigns also push less sugar use, stop smoking, exercise more etc. So salt consumption is a part of a bigger package.

One of the studies that’s considered the biggest body of evidence for the danger of salt and used as example for doctors worldwide contains this exact flaw. It’s the DASH diet study conducted in the 1990s.

The DASH diet is a very healthy diet that includes mostly fresh fruits and vegetables, low fat proteins, low fat-dairy and whole grains. It’s low in sugar and fructose and of course, very low in salt. The DASH diet also restricts alcohol and coffee use.

So what was the conclusion after 459 innocent people were sentenced to a few versions of this wonderful diet for 3-5 years? Predictably, the diet did lower blood pressure slightly. On the average 5.5 mm/Hg for systolic and 3.0 mm/Hg for diastolic blood pressure. This could put borderline hypertension under control.

For those already suffering hypertension the average improvement was even better. They experienced 11.4 mm/Hg slash in their systolic and 5.5 mm/Hg in their diastolic numbers.

Again, you can’t complain about results like these. However, considering the extreme diet changes many people had to make, the numbers are not really drastic. Studies have shown that drinking 250ml of fresh beet juice daily produce pretty much the same results, and without changing a single other thing in lifestyle.

Now the researchers took things even farther and reduced the salt consumption in the next study from 3000mg/day to 1500mg/day compared to the previous study. The average blood pressure dropped even more; down 8.9/4.5 mm/Hg. The average blood pressure drop for those already suffering hypertension (where it really mattered) almost stood still at 11.5/5.7 mm/Hg drop (compared with 11.4/5.5 when using twice as much salt).

This tells you that it was really the diet change, mostly increasing vegetables and fruits as well as reducing sugar intake that played the biggest role in lowering blood pressure for those who already had high blood pressure or pre-hypertension.

Lowering salt intake for those who already have it healthy doesn’t do anyone any good and may actually be dangerous.

The DASH study also didn’t report if people following the diet had any less frequency of stroke or heart attack than those on traditional diets. As the studies we discussed earlier show, lowering salt intake may lower blood pressure- marginally- but it may also increase the risk of heart attack and stroke.

So what we should take from the DASH study is that drastically improving the quality of your diet can bring your blood pressure down. If you have borderline hypertension, this maybe all you need.

Although there’s no excuse to go overboard with salt use, there is also no reason to completely abandon the saltshaker. You’re actually better of avoiding most of the processed food and then allow yourself instead to spread a good quality salt on your steak and baked potato.

The salt in most saltshakers and almost all processed food has little similarity to natural salt.

Part of the processing of processed salt, which is the most widely used, is cooking it at high temperatures. This completely changes its structure. The remaining process is chemical cleansing.

Then, more dangerous chemicals are added such as ferrocyanide and aluminosilicate, which count for about 2.5% of the final product.

Natural salt, on the other hand, contains only 84 % sodium chloride; the remaining 16% is made of other natural minerals such as silicon, phosphorous and vanadium. Even in natural salt there can be some man-made chemicals such as moisture resistance and then maybe a little added iodine. But those chemicals are kept to the minimum.

Since we use relatively small amounts of salt, it’s well worth going for a little pricier, good quality natural salt. Unrefined sea salt found in your local health food store is a great option.

The healthiest salt in my opinion is an ancient, all-natural, unrefined sea salt from the Himalayas. It’s spent thousands of years maturing under great pressure. Not only is it extremely healthy, it’s also so yummy that many of the top chefs in the world refuse to use anything else.

Every study ever made on salt consumption has mostly consisted of highly processed salt. And yet, researchers found very little, if any, connection between salt and diseases. If people were asked to actually increase their salt intake but use unrefined, all-natural salt, I believe it would actually improve peoples’ health.

So my suggestion is instead of abandoning the salt-shaker altogether, focus on a healthy, good quality diet containing plenty of fruits and vegetables.

If high cholesterol is your concern, follow the proven strategy I used to bring my cholesterol down to normal and eliminate the plaque buildup in my heart.

But first, before doing anything else, please leave your comment below.