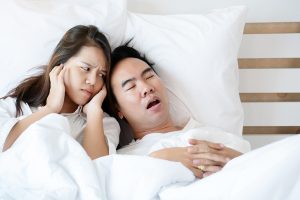 But the important question is, which disease came first. Because that diseases would be the cause of the other. And if we can cure the cause, then the effect would be cured as well, right?

Fortunately a new study in the latest edition of PLOS ONE has sorted this riddle, leading to a two-for-one cure.

According to previous research, sleep apnea causes NAFLD. There are also some small studies that suggest that the causal relationship might work in the opposite direction too, with NAFLD causing sleep apnea.

The problem in trying to sort out the relationship between these two conditions is that they share many risk factors.

For example, it seems as if obesity, diabetes, and heart disease can be either causes or consequences of both of these conditions.

As a result, a team of Korean scientists tried to untangle this relationship by testing the occurrence of sleep apnea in NAFLD patients who lacked traditional risk factors such as cardiovascular disease and diabetes.

They wanted to know whether NAFLD could cause sleep apnea.

Their sample consisted of 334,334 healthy people over the age of 20 who received national health checkups between 2009 and 2014. They were all confirmed to be free of diabetes, heart failure, high blood pressure, and other forms of heart disease.

The health checkups included a questionnaire to test their sleep apnea status.

The scientists identified those with NAFLD via four characteristics that have previously proved to be an accurate way of diagnosing NAFLD without liver scans: triglycerides (fat in their blood), body mass index, gamma-glutamyltransferase (an enzyme), and waist circumference.

Based on the severity of their subjects’ NAFLD, the researchers divided them into four groups, from least to most severe.

After an average follow-up period of 5.3 years, they made the following discoveries.

1. 1,351 subjects were newly diagnosed with sleep apnea, with the more severe cases of NAFLD having the greatest risk: 0.1% of the least severe cases versus 0.8% of the most severe ones.

3. When body mass index was also excluded to prevent it from influencing the results, the most severe cases were 2.19 times more likely to develop sleep apnea than the least severe cases.

Therefore, even independently of diabetes and heart disease, NAFLD is associated with an increase in sleep apnea risk.

And, regardless of NAFLD, you can cure your snoring and sleep apnea in as little as three minutes—starting today—using the easy throat exercises demonstrated here…