Quinoa Super-Food Recipes for ALL Diseases 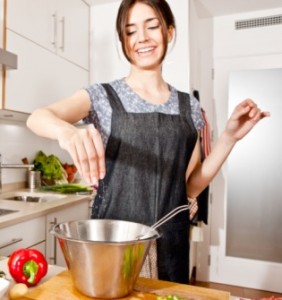 Till recently, quinoa was a little known seed. It has, however, gained popularity since it’s very delicious tasting as well as having several major health benefits. You can get quinoa in your local health food or grocery store throughout the year.

Quinoa is very high in protein. And one of few vegetarian sources that are “complete protein”, meaning it has all nine types of amino acids humans need on a daily basis.

Not only that, it’s also a great source of magnesium, iron, copper and phosphorus. And it’s extremely antioxidant; therefore very much beneficial for someone suffering diabetes, migraine, any type of cardiovascular disease and almost all other health problems.

I’ll explain all this in a second give you one the most delicious Quinoa Recipes I know.

As always, your feedback (as well as your favorite Quinoa recipe) is very much appreciated. So to read the rest of this article and post your comment at the end.

Anymore, the focus of my cooking seems to have shifted from just trying to include healthy foods in my diet to now having to cook to avoid problems.  Recently diagnosed with acid reflux (because of a hiatal hernia) and celiac sprue, I have had to completely change how I cook and eat.

I also am told that IBS is likely the culprit of some of my problems. Ironic…10 years after my niece is diagnosed and less than a year after releasing my guide for treating IBS, I get the same diagnosis. I guess I should have followed my own advice a little better 😉

My husband is showing signs of weakening insulin sensitivity, which is the warning bell for approaching type 2 diabetes. He’s currently working some of the steps Jodi Knapp lists in her Beat Diabetes Guide.

That adds even more incentive to get my relationship with food sorted out.

Although I’ve always been very focused on natural health, given all the family history with which my children are now saddled, I’m more determined than ever to teach them how to get it right from the beginning.

So it is with a little uneasiness but full determination that I added some weird foods to my grocery list for the first time; namely, quinoa. Below, I have shared my first experiment with a meal that is free of gluten, moderate on the glycemic index, and top-notch for heart health while not offending weary, acid-burned tummies. Feel free to experiment with the ‘recipe’ below to suit your nutritional needs. I just hope you’ll give the quinoa a chance. It’s really pretty good.

Quinoa with Carrots and Ocean Perch 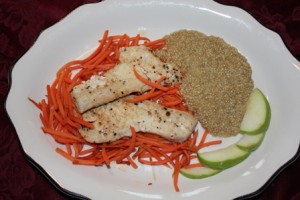 I used plain, organic quinoa and cooked it in 1 ¼ cup of chicken stock and added a teaspoon each of dehydrated garlic and red onion.  I didn’t add any salt, as the stock already had a little in it and I do better without the added sodium.

While that was cooking on the stovetop, I heated the oven to broil the perch. Normally, for diabetics cooking temperatures are not generally something you want that high, but when you are only broiling a piece of fish for 3 minutes on each side you can get away with it.  I let it marinate in 1 tablespoon of lime juice and 1 tablespoon olive oil for a few minutes before popping it in the oven. I did sprinkle it with a bit of crushed black pepper, too.

As the oven heated and the quinoa cooked, I grabbed about a cup of shredded carrots and began to sauté them with a splash (less than a half tablespoon) of teriyaki sauce and a tablespoon of olive oil.  I like my carrots with a little crunch to them so I didn’t let them cook for more than about 5 minutes.

The salt from the teriyaki sauce was plenty to cut the fishy taste of the perch (since I don’t really like fish) and I added some tangy sweet of a raw green apple to garnish. That was a really nice, crunchy compliment.

The package directions explain that after about 12 minutes of simmering the quinoa, remove it from heat and let it set for a few minutes before fluffing with a fork.  Instead, I mixed ¼ cup of cold water with 1 teaspoon of potato starch and mixed in with the broth/quinoa dish and let it cook for about 5 more minutes.  I did this because I really love gravy and this is a gluten-free way of thickening broth that won’t add a ton of calories.  It gave the quinoa dish a creamy, smooth moistness that made it really tasty.

Right before the potato starch step, I put the perch in the oven, since it only takes about 6 minutes total to cook.

The photo shows what I ended up with after plating, and it’s enough for 2 people since perch is really filling, especially when you pair it with hearty, creamy quinoa.

The time commitment for preparing this meal, from the time I started dragging stuff out of the fridge to the time I sat down to eat was less than 30 minutes.  Even if I don’t swoon over the taste of fish, perch isn’t all that fishy anyway and it cooks in very little time at all.

The totals for this exact preparation for saturated fat, calories, carbs, protein, and fiber are ideal if you are trying to change your diet to reduce carbs, increase fiber and protein, and get more color on your plate.

The serving sizes were ½ cup quinoa (prepared), 1 medium perch filet, ¼ of a sliced green apple, and ½ cup carrots. For all this combined, the totals were:

Cholesterol: 45 mg (mostly from the perch since none of the other foods have cholesterol).

Carbohydrates: 80 grams (for diabetics, changing out the apple and carrots for other fruits/vegees will help drop the total carb count).

Fiber: Are you sitting down? 13 grams of fiber in this meal as prepared.  Since 20 grams is the minimum recommended per day, you are more than half way there in just this one meal!

Other nutrients I added in this one, 20-minute meal that has less than 600 calories:

Perch- Vitamin B6, Vitamin B12, Calcium, Selenium, and Phosphorus

Good luck with your food adventures, and please leave a feedback below with your favorite quinoa recipes and other comments.